This information is to help get our dogs to behave. To get the “behavior” we want,  we need to use the language they understand. I many cases dogs have a very small vocabulary.  By expanding it, we can enforce good behavior so you can at least brush their hair, take a bath, or stand still for nail trimming.

Dogs Are From Outer Space!

In my opinion, they are complex yet very “simple creatures”.  They learn easily and sometimes not. These creatures we call “dogs” are space creatures; they have come to earth bearing their gifts of kindness and companionship.  They don’t speak our language.  Everything we say, everything we do or don’t do is emitting some kind of signal to them. Their behavior is how they respond to us.  Whether we touch, look at them, give them a nod or food, these things will imprint a “behavior”, especially the behavior they are doing exactly at the time we touch them, give them a nod or look at them. Unknowingly we train them at all these turns.  What we end up doing is repeating words they don’t know that attach to behaviors we don’t want. And if we’re lucky, we get a behavior we want, a sit, a paw for a shake but sometimes we really don’t know how we got it, so we repeat and thus the behavior gets repeated.

Take control and expand their vocabulary.

I once took a foster dog to the dog park. It was not a fenced-in park for it was during the years just before dog parks became popular. As a dog trainer at the time, I knew the importance of dogs knowing their names in different environments would be in better control of their handlers. This dog’s name was Bubba; a very sweet, well- behaved dog. There were several dogs running amok on the hills of that park, but because I didn’t really know Bubba, we kept our distance from the others. But not for long, because another dog was fast approaching Bubba as that owner was not in control. It looked like the 2 dogs were going to get into a squirmish. I dropped the leash and began going in the opposite direction, just calling Bubba, Bubba, Bubba! After what seemed like a million Bubbas, he began turning from the other dog and began following me far enough so I could grab his leash. Whew!!! that was a close-call that averted a dog fight all because I knew enough to get my dog’s attention by calling his NAME.

If all your dog hears is NO, then they will think their name is NO! We have to help them learn our language. When we call their name it is a signal that you are asking for their attention.  Learning their NAME is the best thing you can do for your dog. It may save her life! So if we are speaking to them, we begin the sentence with their NAME. “Harvey, go chase the ball. Harvey go get in your bed. Harvey don’t stand on the table.  Harvey, Harvey, Harvey.  Their name is music to their ears!

Here are 6 steps to get ready to train them:

Let’s teach them a new word  — Their NAME

How Do You Know the Dog Learned? Here is what you should look for:

If the dog turns their head when you call their name, They LEARNED. Let me know in the comments if you tried this. What did you learn or what do you think?

Hi, Welcome to My Blog! 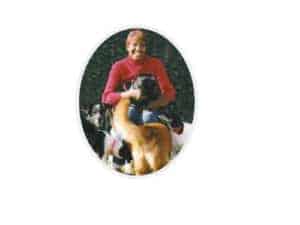